The Christmas Sweet Bread with Candied Fruits – What is panettone?

Panettone is a traditional Italian bread that’s made during the Holiday season and is typically baked with yeasted dough that makes it light and fluffy.

The dough is usually infused with citrus and spices, and it often contains raisins, dried fruits (often dried cherries), candied peels and candied fruits, and nuts. Panettone is usually round in shape and is often decorated with a dusting of powdered sugar.

The bread is typically served sliced and it can be enjoyed on its own or with a cup of coffee or tea.

Panettone originated in Milan, Italy and it was originally made with a starter dough that was left to ferment for several days. The bread was then baked in a tall, cylindrical mold which helped to give it its characteristic shape.

Today, panettone is enjoyed all over Italy and it is also popular in other countries, such as Brazil, Argentina, and Peru.

Although I was always aware of what panettone is, I don’t remember ever trying it until I spent some time in Peru.

While in Lima during Christmas time, we bought some homemade panettone and I was hooked!

Now, whenever I see it during the Christmas season, I have to buy a loaf.

If you are looking for a traditional Italian holiday bread to add to your holiday table, look no further than panettone! This delicious bread is sure to please everyone at your gathering.

Where does Panettone originate from? 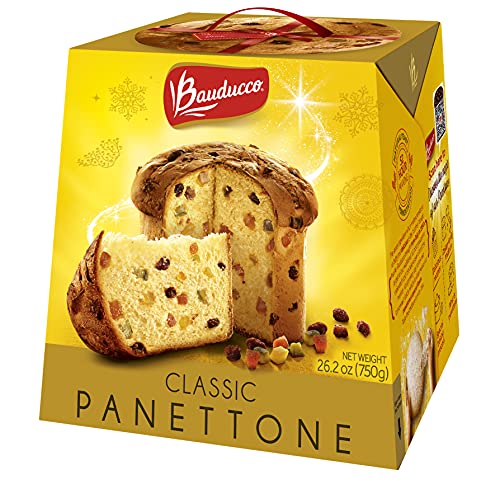 According to legend, panettone originated in Milan in the 15th century.

The story goes that a young man named Toni was working in a bakery when he fell in love with the owner’s daughter. To win her hand in marriage, he set out to create the perfect bread. The story ends with it being called Bread of Tony or Pan de Toni – which is literally what panettone describes.

Another story says that a Russian émigré living in Milan who just fled the Bolshevik Revolution came in and asked the head baker, Angelo Motta, of this family-run bakery to bake him a cake similar to the Russian Easter cakes that the was used to.

Angelo Motta opened his baker recently so he was eager for the new business.

This Russian gave Motta the recipe. Motta looked at the recipe and noticed that it was similar to a wheat bread that they bake in Italy during Christmas.

Needless to say, panettone was born and it was a hit. Motta adopted the Christmas cake into his bakery and it became a big deal.

Whether or not these stories are true, panettone really is an Italian bread originating from a Milan bakery.

What ingredients are in Panettone?

Panettone is typically made with a sweet dough and flavored with candied fruit.

While the exact ingredients can vary from recipe to recipe, most panettones contain flour, yeast, butter, eggs, sugar, raisins, or other fruits.

Candied fruit, such as orange peel or raisins, is often added to the dough for flavor.

Nuts, such as hazelnuts or almonds, may also be used.

The dough is usually light and airy. It has a puffed top shape because it’s made in a cylindrical tin.

Since panettone is a sweet bread, it’s often eaten for dessert or sliced and served either plain or toasted with butter, and it can also be used in a variety of desserts.

How is panettone eaten?

Panettone is often enjoyed as a celebratory treat.

It’s light and fluffy, with a subtle sweetness that comes from the addition of candied fruit. Panettone typically has a cylindrical shape and is often decorated with a dusting of powdered sugar.

It can be enjoyed on its own or as part of a festive holiday breakfast. To eat panettone, simply slice off a piece and enjoy.

No matter how you enjoy it, panettone is delicious!

Panettone is perfect for freezing. wrap it tightly in plastic wrap or place it in a freezer bag.

To thaw, unwrap it and place it on a wire rack at room temperature for several hours, or overnight.

Once thawed, panettone can be stored at room temperature for a few days. Enjoy!

How to slice and serve panettone

When it comes to slicing and serving panettone, there are a few things to keep in mind.

First, it is important to use a serrated knife in order to avoid squishing it.

Second, panettone is best served at room temperature, so be sure to let it sit out for a bit before cutting into it.

Finally, when slicing panettone, be sure to cut it into wedges rather than slices. This will help to prevent the panettone from falling apart.

Serve panettone with a cup of coffee, tea, or dip it into sweet wine.

If you can’t eat it right away, use it as the base for a holiday breakfast bread pudding.

It’s also perfect for toasting and serving with butter or jam. No matter how you enjoy it, panettone is a delicious and festive treat!

Wrapping up with Panetonne, the Traditional Italian Bread

Nowadays, people make panettone cake using all kinds of custom recipes. They make a big loaf using dried organic fruit, liquid eggs, chocolate, or Nutella. And they don’t even wait for the holidays!

This is awesome! Panettone is delicious and is a widely enjoyed holiday bread, so if you have your own top-of-the-line bread machine with a dough hook then you don’t have to wait until Christmas to buy panettone and enjoy this special food.

You can make your dough rise three times, just like it’s done traditionally, and then you can eat the whole cake yourself!

And best of all, you can customize the cake however you want.

Whatever you decide to do, I urge you to either bake it yourself or buy it when you see it during the Christmas season! See our top choice for the best bread machine on Amazon!