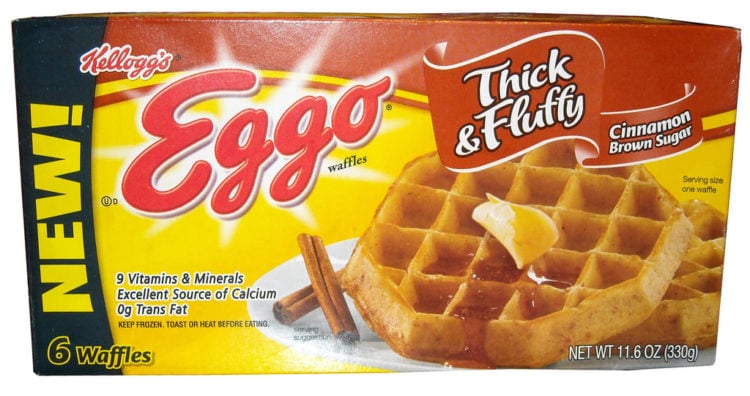 Let me clear the air, I love the simpleness that frozen food brings. You take it, pop it in the toaster or microwave and within a couple minutes you can have a decent tasting waffle. The problem is that many, or most of frozen foods have ingredients that are thought to be unhealthy.

Eggo waffles is well known for paying food bloggers big money for sponsored posts. A sponsored post is when, for example, a company pays me to write a review of their product. Many times food bloggers give honest reviews in these situations, however, it’s just difficult to critique a company that’s paying your bills.

For the most part, health food bloggers in the Keto, Gluten Free, Low Carb, or Paleo realm will not give in to companies wanting to buy a positive review. However, it’s still common to see posts paid for.

Bloggers normally do openly say when it’s a sponsored post, but it’s not always obvious. Eggo throws massive amounts of money at bloggers and most recently at product place. Eggo is a sponsor of the Netflix Sci Fi show Stranger Things. Now, I love Stranger Things, but I don’t like seeing people eating Stranger Ingredients from Eggo waffles!

What’s so bad about frozen waffles?

I don’t like the ingredients! I try not to eat foods with dyes because some studies show dyes are potentially harmful. I also try to avoid soy lecithin. Soy lecithin is in so many things and some studies indicate that too much soy can be harmful. Frozen waffles also have soybean oil, which is more soy. When the waffles aren’t organic, they’ll likely contain genetically modified organisms (GMOs) which I also try to limit since there is no way to know the long term effects. Maybe GMOs don’t do a thing, but there’s no way to know for sure.

Another ingredient that I try to avoid at all costs are dyes. Some dyes are supposedly safe to ingest, and almost all foods have dyes in them, but it doesn’t mean that you can ingest them without consequence. Many frozen waffles also contain a preservative called TBHQ. TBHQ allows frozen waffles to stay “fresh” in the freezer for long periods of time.

We looked at five of the top frozen waffle brands that are available at most grocery stores across the country. To stay consistent, we only selected plain waffles. No waffles that were mutligrain, whole wheat, or favored were looked at.

Aunt Jemima may make incredible pancake and waffle syrup, but they also make frozen waffles. Its ingredients are below.

Who doesn’t love Eggo waffles? I do! Still, the ingredients in Eggo waffles make me want to take a second look at whether I should be eating these things!

Van’s website didn’t work, but I was able to find the ingredients on Wal-Mart! Still, although it’s ingredients are decent, it still contains some scary sounding ingredients!

These waffles aren’t the best, but they had some of the best ingredients. Still, soy is prevalent in this product.

Nature’s Path is actually one of my favorite waffles, still, it contains some ingredients that I wouldn’t normally want to ingest.

Do Eggo Waffles have Eggs?

Yes! Eggo waffles have eggs in them. Judging by the place on the ingredient list, it’s not much at all. So if you have a slight egg intolerance, it may not be a problem.

Do Eggo Waffles have Dairy?

No, Eggo waffles don’t have any dairy in them, at least not the homestyle ones.

Are Eggo Waffles Bad for you?

There is no one food that is either bad or good for you. You have to take in many other factors.

So, are frozen waffles bad for you?

Again, not necessarily. There isn’t any one food that’s “bad” for you. But why eat frozen waffles when you can make better waffles at home?

Who wins the frozen waffle contest?

Nature’s Path is the clear winner when only looking at ingredients. Although soy oil and soy lecithin aren’t ingredients I want on my waffles, the ingredient list is much less than the others. Still, I always prefer waffles that only have the ingredients that I put in myself.

The real winner is – Homemade Waffles!

1. You control the ingredients

I know the quality of the ingredients and I can use what fits my budget. I can add or change the recipe whenever I want based on what’s in the house.

Read our post on Waffle Iron Basics, which includes a basic recipe for homemade waffles.

Or if you’re on a specific diet, try these Paleo Waffle recipes.

2. These waffles are filling

Since they’re made with protein, fat, and I can limit carbs and added sugar. For extra protein, I add plain nonfat greek yogurt as a topping. For sweetness, I go with strawberries.

3. Fits your time and money

These are ingredients I use for other meals throughout the week, buying them works better in our grocery budget. It also makes it easy to do the more you do it. The first time may be a little annoying, however, once you do it a few times, you’ll pick up a recipe you’re comfortable with in no time.

For a multi-functional waffle maker that does much more (and also has ceramic plates) – Check out the George Foreman Evolve Grill.

Conventional frozen waffles are full of stuff we wouldn’t put in homemade waffles, so why eat it? I just can’t see myself adding sodium aluminum phosphate, soy lecithin, or soybean oil to my food.

Therefore, I have a choice, and I choose to make homemade waffles that are healthy, filling, and delicious. The time it takes to learn a recipe well and get used to a waffle iron is time that is well spent. The waffle iron and recipe will benefit your family for years to come.

My name is Carlos, I'm a husband, father, and Kitchen Expert. Actually, I'm a kitchen ROOKIE. But I love food, love gadgets, and love things that make my life easy. Learn more about me here.