Every January you can look around your social media profiles and instantly guess what everyone’s New Year’s resolutions are. There’s one that’s likely more widespread than any other, wanting to be healthy. For many people, becoming healthier means losing weight. For me, being healthier means cutting out unnecessary calories, like calories that come from donuts, pizza, and even waffles!

On the other hand, though, I do love to treat myself on the weekends.

And because I make my own waffles in my own waffle maker, I control everything that goes in the batter. That means that I can customize my waffle batter to be as healthy as I want. It doesn’t matter if I want Vegan waffles, Gluten Free Waffles, Paleo Waffles, or indulgent dessert waffles topped with whipped cream and Nutella, I can make it! And because my waffle iron ir durable and affordable, I can make it happen.

If you think that all waffles are created equal, you’d be wrong.

Waffles vary in shape, in texture, in size, and in thickness. The greatest disparity though, takes place between regular waffles and Belgian waffles. It’s not only chefs who can tell the difference, you’ve likely seen it yourself, whether you realized it or not.

These waffles are very popular in North America and were initially showcased at an expo that took place in Brussels in 1958. They were introduced to the US by a Belgian called Maurice Vermersch. They were first named Bel-Gem waffles. In the US, they debuted in Washington DC at the Century 21 Expo in 1962. They were later popularized in the US during the New York World’s Fair in 1964. Since then, they’ve only increased in popularity and are now the number one waffle seen in restaurants, coffee shops, and in desserts across America and even across the Western Hemisphere.

Don’t believe me? Even in Colombia, you can go to a restaurant that specializes in waffles and crepes. It’s called Crepes y Waffles. And you guess it, the only waffles they serve are Belgian ones. In case you’re wondering, it’s called “Gofres” although many Spanish speakers also just say “Wafle”.

The history of regular waffles dates back to the 9th and 10th centuries, the Middle Ages. They began as a mixture of water and flour being placed between two iron plates and then heated until they were ready to eat. Similar to a communion wafer. There are different types of waffles ranging from Brussels, Flemish, American, Scandinavian, Belgian, Hong Kong, Stroopwafels, Pandan, and even Hotdog style waffles!

Are you confused about what a Hotdog style waffle is? Click here to learn more.

This is the most noticeable difference between the two. Belgian ones are larger in size and much thicker compared to regular or American style waffles. Belgian waffles have deep grid patterns and are lighter in batter, resulting in a fluffier waffle. These deep grids make Belgian waffles ideal dessert waffles since they can hold large amounts of chocolate syrup, maple syrup, honey, whipped cream, ice cream, or whatever else you desire. 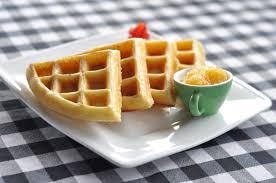 It’s pretty easy to spot the difference, isn’t it?

The top picture is of regular or classic style waffles. You can easily see the shallow pockets.

Also pure Belgian waffles use yeast or egg whites in its batter while the regular waffles consist more of baking powder.

However, regular waffles have an advantage here for some people. If you’re looking at making a waffle sandwich, that means taking two waffles and putting ham or cheese in between them, you need to use regular waffles. Being thinner gives them the advantage here. Putting together two Belgian waffles for a sandwich would just be too much! Not only does this Hamilton Beach Flip Belgian Waffle Maker make great waffles, and fast, but its removable plates means that cleanup is a breeze, since you can just pop off the plates and put them in the dishwasher. My favorite regular waffle maker isn’t really a regular waffle maker at all. It’s actually an indoor grill. This is a favorite of ours because it’s multi-functionality and because it’s waffle plates are removable and ceramic. There are many people who don’t want to eat off of a nonstick Teflon coating, so they prefer the more natural ceramic coating. Being removable means that you can take off the plates and leave them soaking in order to easily clean them later on.

Read our in depth review here.

Are you looking for something a little different? Do you happen to be a Texan or know a Texan? Read our in depth review of the Texas Belgian Waffle Maker!

At the end of the day, the decision is yours to make, you can’t go wrong with either type of waffle maker! 2 thoughts on “Belgian Waffle vs Regular Waffle – What’s the difference?”